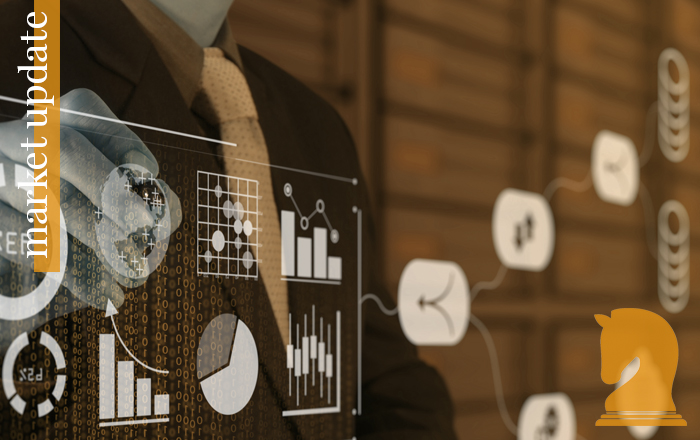 Goodbye September! No, really, goodbye. In last month’s commentary, we quoted a statistic that September is the worst month of the year for the markets dating back to 1950. So, while we expected a bit of a pullback, we didn’t expect that much of one! The S&P 500 logged in a whopping-9.34% for the month. There was no place to hide to put it frankly. Virtually every asset class declined with growth leading the pack on the way down; even gold is down over 10% YTD. In what has proved to be one of the wildest months for fixed income in recent memory, the 10 yr Treasury climbed dramatically, even crossing 4% at one point before pulling back.(That may not sound like a lot, but that’s a major swing for bond rates in such a short amount of time). This wild fluctuation in rates pushed 30 yr mortgage rates over 6.50%(the highest since 2008)& CD rates spiked an entire percentage point.(See rate chart below) So when we say “Good riddance to September” we mean it.(That was a long-winded way of telling you that your September statements won’t look great.) 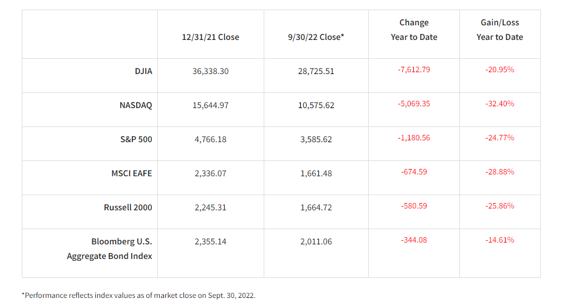 Inflation is still the number one point of contention right now and the debate clearly is how high the Fed will have to raise rates to break inflation, and for how long. Our crystal ball is in the shop right now, so we don’t have an answer on this one, but the thinking that inflation has most likely peaked did get more supportive data this month.

These are all leading indicators that hopefully bring us lower inflation numbers at some point sooner rather than later. The sooner inflation is under control, the sooner the Fed can ease off the interest rate hikes which in turn, should reduce the severity and length of a recession.

And while the bond market had a rollercoaster ride the past couple of weeks, it has brought us some of the best rates we’ve seen in years. Short-term Treasury’s (1-3 year) are between 3.80–4.09% as of today. We are seeing yields well over 5% right now with investment grade Corporate Bonds, and even Brokered CD’s have joined the party by tipping 4%:

There is no way to sugarcoat it though: the bear is in charge right now. In past commentaries, we quantified the difference between a“non-recessionary” bear market & a“recessionary” bear market. It certainly appears we’re in the latter now; so, we’ll remind you a bit of context: The average recessionary bear market is 33% over a 13-month span. As of right now, we are 24% in 9 months. While every bear market is different, if this current bear behaves like the averages, the bad news is we could still have another 10% or so to go in the coming months. The good news, for the optimists out there, is that we could be about 3/4 the way through this thing.

“While it is easy to become increasingly more short-sighted in volatile periods, we remind investors that a lot of negative news has already been priced in at current levels. High inflation is an issue, but leading indicators suggest it should improve-the timing and degree are the unknowns. Equities likely still contain downside in the short-term (weeks to months), but don’t lose sight of the long-term bull market opportunity on the other side of the current weak trend. Bull markets go up 152% on average and last for years.”

Lastly, we can’t end without mentioning the “October Effect”. Popular myth has it that October can bring surprise market crashes. (i.e., Black Monday, October 1987, the Crash of 1929 on October 24th,1929, etc.) However, the reality is that October has ended more bear markets than any other month. While we’d love to say that’s possible this month, we don’t think we’ll be that lucky this year.

And while we’re talking about animals, here’s your Useless Fact of the Month:

Please reach out if you have any questions on your portfolio or would like a review.

This is not a recommendation to purchase or sell the stocks of the companies mentioned. There is no assurance the trends mentioned will continue or that the forecasts discussed will be realized. Past performance may not be indicative of future results. Economic and market conditions are subject to change. The Dow Jones Industrial Average is an unmanaged index of 30 widely held stocks. The NASDAQ Composite Index is an unmanaged index of all common stocks listed on the NASDAQ National Stock Market. The S&P 500 is an unmanaged index of 500 widely held stocks. The MSCI EAFE (Europe, Australia, Far East) index is an unmanaged index that is generally considered representative of the international stock market. The Russell 2000 is an unmanaged index of small‐cap securities. The Bloomberg Barclays US Aggregate bond index is a broad‐based flagship benchmark that measures the investment grade, U.S. dollar‐denominated, fixed‐rate taxable bond market. An investment cannot be made in these indexes. The performance mentioned does not include fees and charges, which would reduce an investor’s returns. Every investor’s situation is unique, and you should consider your investment goals, risk tolerance, and time horizon before making any investment. Investing involves risk and you may incur a profit or loss regardless of strategy selected. Be sure to contact a qualified professional regarding your particularsituation before making any investment or withdrawal decision. Brokered Certificates of Deposit (CDs) purchased through a securities broker and held in a brokerage account are considered deposits with the issuing institution and are insured by the Federal Deposit Insurance Corporation (FDIC), an independent agency of the US, Government. FDIC deposits are insured up to $250,000 per issuer (including principal and interest) for deposits held in different ownership categories including single accounts, joint accounts, trust accounts; IRAs, and certain other retirement accounts. The deposit insurance coverage limits refer to the total of all deposits that anaccount holder has in the same ownership categories, at each FDIC-insured institution. For more information, please visitfdic.gov. About Liquidity: Funds may not be withdrawn until the maturity date Or redemption date, However, the brokered CD, are negotiable, which means, that although not obligated to do so, Raymond James and other broker/dealers presently maintain an active secondary market at current interest rates, the Market value will fluctuate and, if the CD is cashed out priorto maturity, the proceeds may be more or less than the originalpurchase price, Holding CDs until term assures the holder of par value redemption. CDs are redeemable at par upon death of beneficial holder. FDIC insurance does not protect against market losses due to selling CDs in the secondary market prior to maturity.