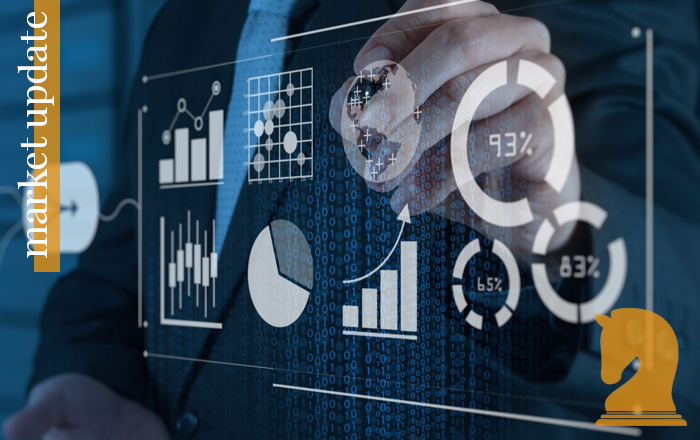 Much will be written, studied, and argued in the history books looking back on the past 3 years: a global pandemic that saw the world spend the better part of 2020 completely shut down with unemployment hitting 27%, massive amounts of money distributed to pretty much anyone & everyone, and an economy & stock market that defied all the odds to create new highs.  But the party ended Jan 3, 2022, as the stock market went on to have its worst year since 2008.  (The 7th worst calendar year on record).   I would sum up 2022 as the Year of Volatility as the S&P 500 had nearly 120 daily swings of +/-1%.  That’s only happened 1 other time in the past 50 years.

Fortunately, bonds are there to help soften the years when stocks stumbled, right?  Normally yes, but not in 2022, where bonds had their worst year since 1975, ending down -13%.

This was only the 5th time since 1928 that BOTH stocks and Treasury bonds declined at the same time. 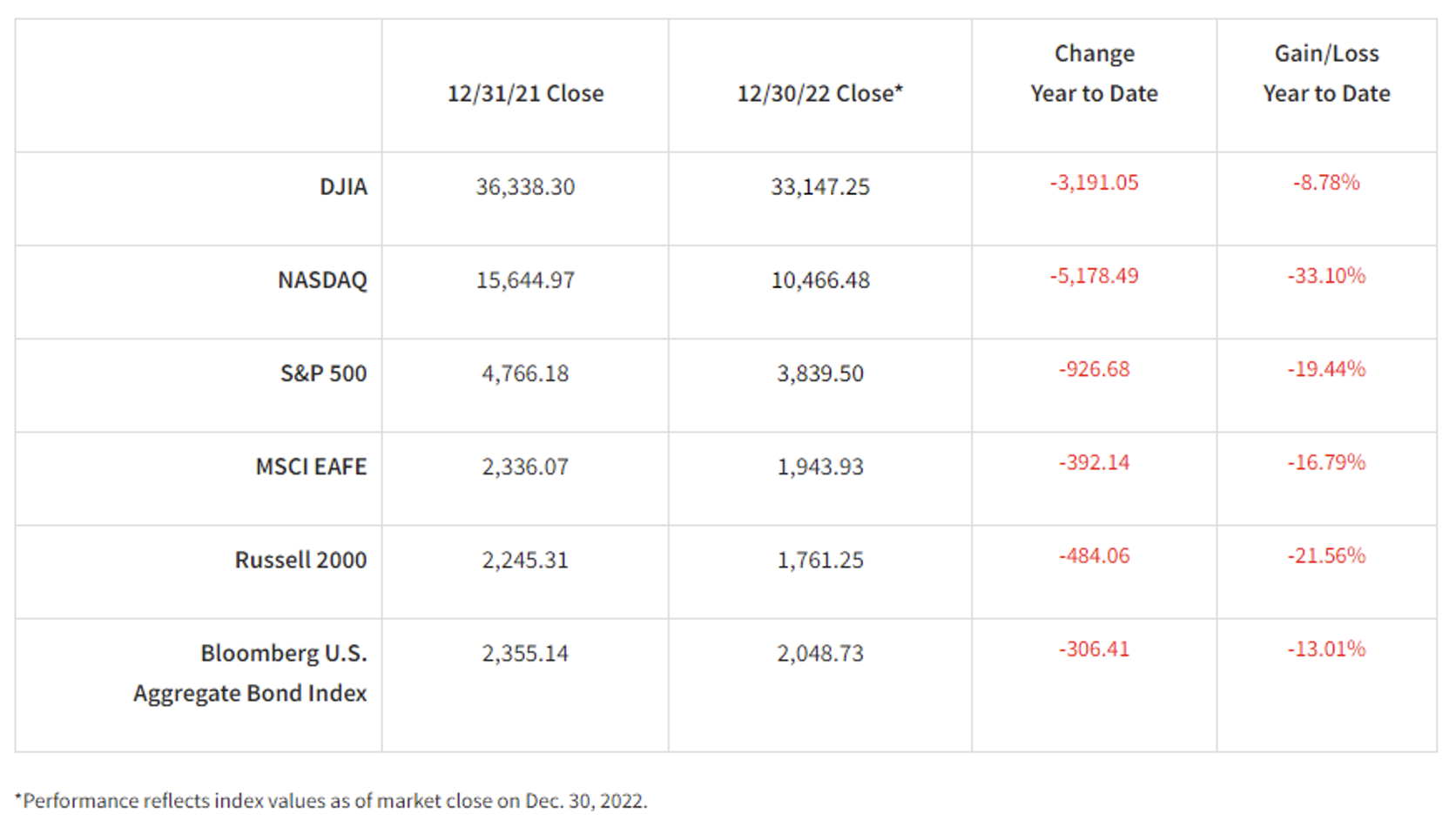 So, what worked?  Frankly, not much.  Energy and commodities were the clear winners if you were lucky enough to have picked those.  I say lucky because as you can see from the following chart showing the past decade’s winners & losers, commodities rarely are the top-performing asset class.  In fact, even with last year’s massive +70% return on energy stocks, the 10yr return on energy has only been 5.5%.  (As measured by the Vanguard Energy ETF – VDE).  Value & defensive stocks fared significantly better than growth stocks last year; Small & Mid-cap stocks held up better than Large Caps.  And lastly, Real Estate and Gold didn’t act as the hedge one would typically think. 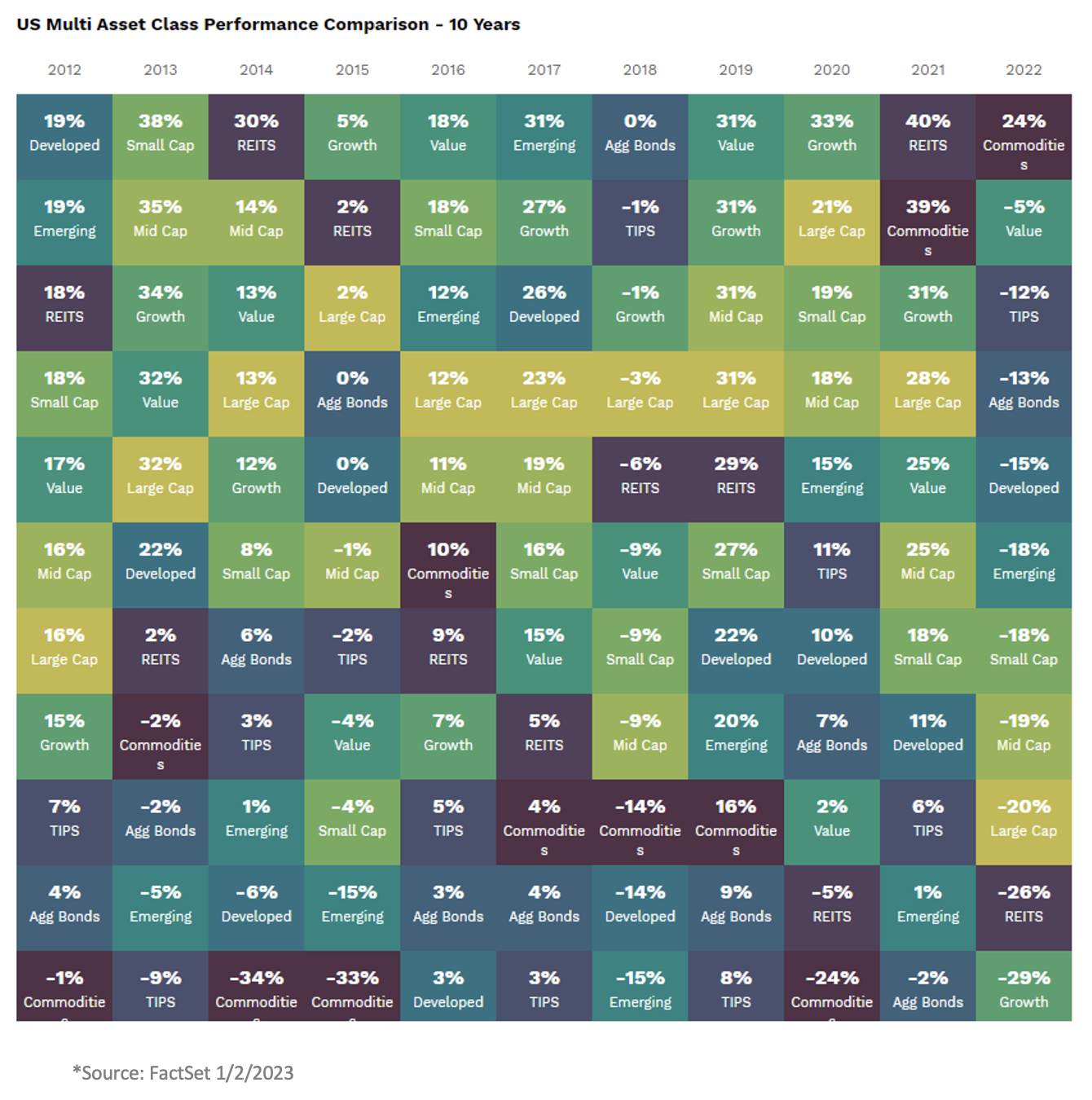 In looking back at 2022, I think two things really surprised us:

So, let’s add some perspective to this and what it means for serious, long-term investors.  As we’ve said in past commentaries and will continue to do so: Bear Markets are never fun to go through and on average decline -33% over 13 months whereas Bull Markets have returned +152% and typically last 3-5 years.  That’s still a good trade-off for long-term investors with more than a 5-year time horizon.  Take the S&P 500 for example, even after factoring in the -19% decline last year, the 5-year return for the S&P 500 is still around 9%.  That’s pretty good in our book.

Here are some things we’re watching as we enter 2023:

Finally, if you bought I-Bonds last year, don’t forget that you can now purchase another round of $10,000 per SS#.  The rate has declined from what it was but is still an impressive 6.89%.

Here’s your Useless Fact of the Month:

In 1966 Fredric Baur came up with the idea to stack potato chips into a can instead of simply throwing them into a bag.  Proctor & Gamble would go on to sell them as Pringles.  Fredric eventually died at age 89 and his final burial wish was to be cremated and placed into (you know where this is headed…) a Pringles can.  So, as any good family would do, his children stopped at Walgreens on the way to the funeral and purchased a can of Pringles to put dad’s ashes in.  What flavor did they choose for dad?  Original flavor, of course.  (Obviously, they weren’t from the south, or they would’ve chosen Ranch flavored).